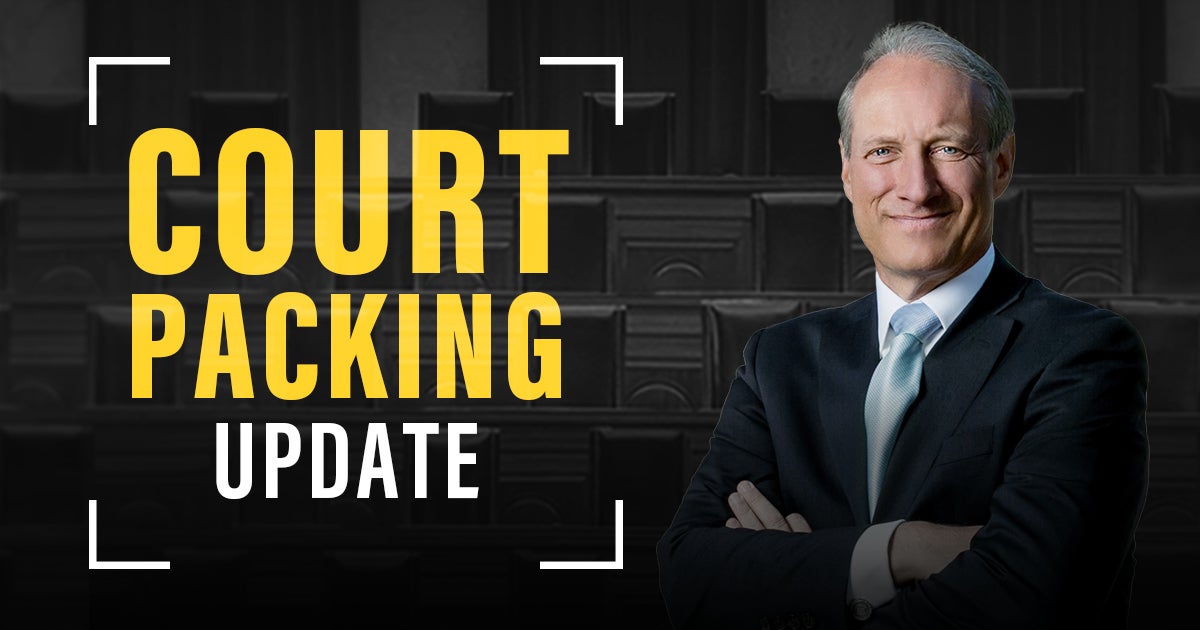 Supreme Court Justice Stephen Breyer has been making the rounds on his book tour this summer, fielding uncomfortable questions about why he hasn’t quit his job and fending off demands from the Left to “pack the court.”

Breyer, considered one of the liberals on the Court, was nominated by President Bill Clinton and confirmed in an 87-9 vote by the Senate in 1994. He has become the target of pressure groups on the Left who want to see him replaced by a younger Democratic nominee. They worry that if the 83-year-old justice stays too long, he may leave the Court, one way or the other, under a Republican president who will nominate a conservative.

Even if Breyer complied with its demands, the Left seems desperate to add the Supreme Court to its political arsenal. Many are now calling for more seats to be added to the High Court so as to tilt it in their party’s favor—a practice known as “court packing.”

Breyer has said he will retire when he’s ready, making clear that he’s not just another partisan chip for the Left. In his new book The Authority of the Court and the Peril of Politics, he points out that “the Court’s power, like that of any tribunal, must depend on the public’s willingness to accept and follow its decisions.” In other words, trust—not power—is what binds Americans to this institution.

Any talk of court packing, Breyer writes, “should take account of certain background considerations, such as the trust that the Court has gradually built, the long period of trust needed to build that trust, and the importance of that trust in a diverse nation that values, indeed depends upon, a rule of law.”

Court packing destroys trust by reducing the Court to a hyper-partisan tool, a “tribunal” freighted with political hacks, “politicians in robes” waiting for instructions from party headquarters. You would quickly find Americans—and their political leaders—skeptical, cynical and distrustful of opinions issued by a “Democratic” or “Republican” court.

Instead, Breyer writes, “A judge’s loyalty is to the rule of law not the political party that helped secure his or her political appointment.”

In August, Breyer returned to that theme. He told the New York Times he was wary of the court-packing movement because it could destroy public trust and spur rounds of tit-for-tat partisan expansions.

“Why do we care about the rule of law?” Breyer said. “Because the law is one weapon—not the only weapon—but one weapon against tyranny, autocracy, irrationality.”

During a recent Fox News Sunday interview, Breyer persisted, saying “if one party could do it, I guess another party could do it. On the surface, it seems to me [once] you start changing all these things around and people will lose trust in the Court.”

Despite the current partisan sniping over the Court, and recent contentious nomination battles, more than two-thirds (68 percent) of Americans retain “a great deal” or “a fair amount” of trust in the Supreme Court, according to a 2019 poll by the Annenberg Public Policy Center. One in four respondents showed a “great deal” of trust that the Supreme Court acted in the interest of the American people, up from 14 percent in Annenberg’s 2013 survey.

What Breyer seems to understand—and progressive extremists insisting on his immediate departure forget—is that, the minute the judiciary ceases to act independently and uphold the rule of law, Americans will lose trust that law is above politics. At that point, the Constitution becomes a mere historical curiosity, and government must resort to raw, coercive power. The result, as Breyer predicts, is “tyranny, autocracy, irrationality.”

This is what John Adams, in his October 1798 letter to the Massachusetts Militia, was getting at when wrote, “We have no Government armed with Power capable of contending with human Passions unbridled by…morality and Religion. Avarice, Ambition [and] Revenge or Galantry, would break the strongest Cords of our Constitution as a Whale goes through a Net. Our Constitution was made only for a moral and religious People. It is wholly inadequate to the government of any other.”

For now, the “cords” of the Constitution are holding. And, like Justice Ruth Bader Ginsburg before him, Justice Stephen Breyer values the Court, opposes court packing and is doing what he can to keep those cords from breaking.

Note: This article was first published on Newsweek and is re-published here with permission. The article presents the main points of an op-ed published in Newsweek. This work was authored by Kelly Shackelford. The full article can be found on Newsweek website, here.