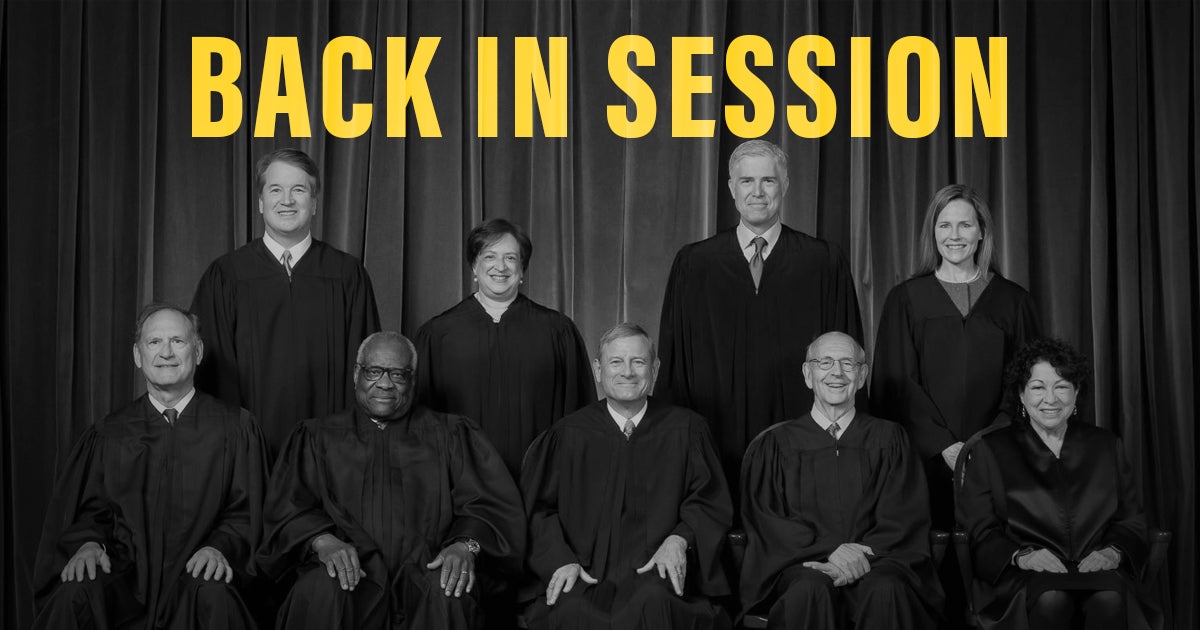 As the Supreme Court of the United States returns to in-person arguments, the only audience allowed will be on the other side of live-streamed audio. All ears will be tuned to One First Street, NE, as the justices consider several cases impacting our constitutional rights.

All eyes are on Dec. 1 when the justices hear one of the most consequential arguments in decades: Dobbs v. Jackson Women’s Health Organization. The case is billed as yet another opportunity for the Justices to reconsider Roe v. Wade, one of the most controversial decisions in U.S. history.  Depending on the outcome, the case could very well reset the national dialogue over abortion.

The very next week, the court will hear arguments in Carson v. Makin. Our friends at Institute for Justice are lead counsel in the case, asking the court to reverse a lower court decision that allows the state of Maine to fund otherwise generally-available student aid to families unless they attend a religious school.

Our firm, First Liberty Institute, is co-counsel on this case because we believe such religious discrimination has no place in our country. It stands against the very principles of our promised freedom to exclude families who qualify for the needed educational assistance in every way, except that their students learn the ABC’s and 123’s at a religious, rather than secular, school.

Even before these two big cases are argued, critical issues touching the First and Second Amendments will be heard first.

On Nov. 1, the case of a death-row inmate denied the presence of a minister at his execution will determine whether Texas violated the free exercise clause of the First Amendment and Religious Land Use and Institutionalized Persons Act (“RLUIPA”).  Ramirez v. Collier reminds us that, even in the most extreme moments – death row – Americans are not deprived of their right to exercise their faith.

While these are the major cases we know about so far, other petitioners await learning whether their case will even be heard.

For instance, First Liberty appealed a case where the City of Fredericksburg asserts that its interpretation of the Presbyterian Book of Church Order is more accurate than the Presbyterian Church in America’s. That is a problem.

Government officials have no right to substitute their theology for the church’s. We are proud to represent New Life in Christ Church and hope the Supreme Court reverses Fredericksburg’s unconstitutional decision.

Finally, in one of the most watched cases in America over the past 10 years, the silent prayer of a football coach may determine whether the right to be religious in public is protected.

Bremerton, Wash., High School fired Coach Joe Kennedy after he took a knee in quiet prayer following a football game. Shockingly, a judge on the U.S. Court of Appeals for the Ninth Circuit wrote, “I personally find it more than a little ironic that Kennedy’s ‘everybody watch me pray’ staged public prayers … so clearly flout the instructions found in the Sermon on the Mount on the appropriate way to pray.”

It is one thing for someone to disagree with Kennedy’s silent prayer on bended knee and yet another for a public school to terminate him for doing so. It is beyond the pale, though, for a federal judge to suggest that his own personal religious beliefs are better than Coach Kennedy’s!

The Supreme Court should take Kennedy’s case and send a very clear message:  Banning coaches across the nation from praying just because they can be seen is wrong and contradicts the Constitution.

Finally, lurking in the background of all these cases is the threat to pack the court. Adding justices to the court in order to reach the political results you are seeking is a horrible idea, and dangerous. This would be a disaster, an act of pure political revenge that would threaten the courts and the civil liberties of all Americans. Preserving the independence of the judiciary is essential to preserving our constitutional democracy.

In Federalist No. 78, Alexander Hamilton called the Supreme Court, “the citadel of the public justice and the public security.” It is within that citadel that the Justices undertake their unique obligation to preserve and defend the Constitution against political greed.  As they take the bench, and hear the prayer that opens each court’s session, so let it be:

“God save the United States and this Honorable Court.”

Note: This article was first published on Fox News and is re-published here with permission. The article presents the main points of an op-ed published in Fox News. This work was authored by Kelly Shackelford. The full article can be found on Fox News website, here.