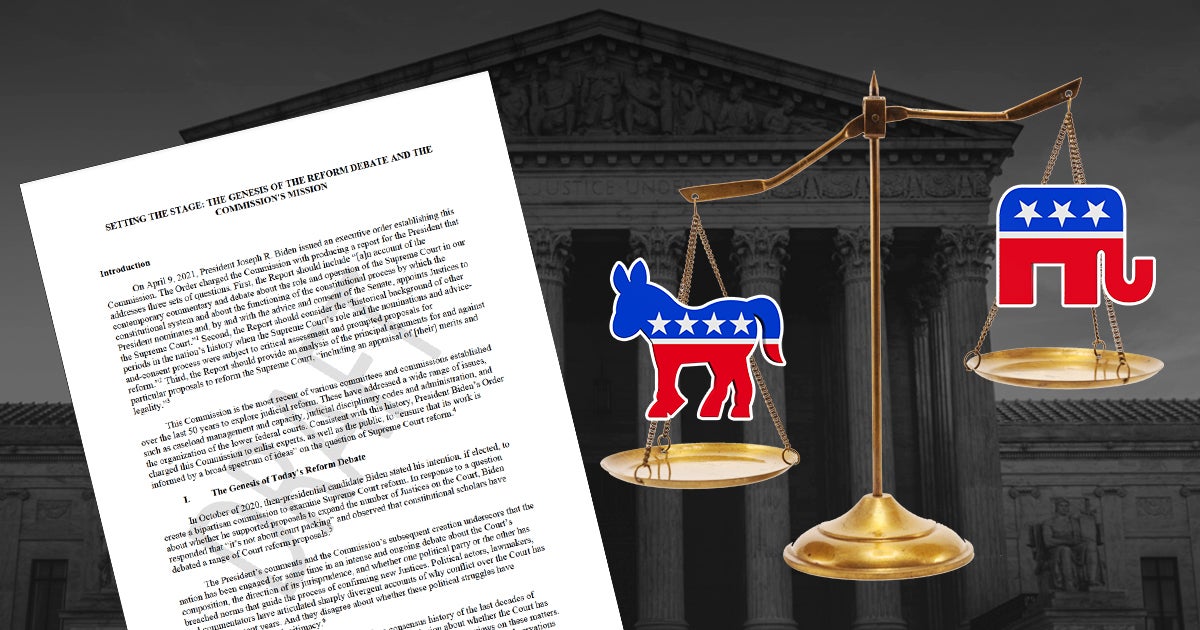 Surprising no one, the presidential commission studying potential U.S. Supreme Court reform measures has issued a draft report that stopped short of any recommendation to turn the nation’s highest court into a partisan rubber stamp.

How could it have been otherwise? The 36-member panel reached the same conclusion as did President Biden, current and former justices including Ruth Bader Ginsburg, and elected officials who declined to join the left-wing fringe. In short, the commission said court-packing would undermine the public’s trust in the court’s crucial role as protector of the Constitution and civil liberties and turn it into another partisan tool.

Expanding the Supreme Court from nine justices to 13 or more to clear the way for a political agenda “would reinforce the notion that judges are partisan actors” and would undermine the “perception” of judicial independence, the commission said in its report. What’s more, the commission pointed out that striving for an ideological balance on the court was a fool’s errand when no such balancing act exists in Congress or the White House. That’s a matter of election outcomes.

The commission’s warning echoed that of Justice Amy Coney Barrett who, in a speech last month in Louisville, told her audience that “my goal today is to convince you that this court is not [composed] of a bunch of partisan hacks.” She argued that justices are guided by their “judicial philosophies” and not by personal political views.

But political hackery is exactly what some on the left have been aiming for with dark money-funded media campaigns and legislative initiatives in Congress. Those backing these initiatives likely knew that the Biden Supreme Court commission would never back their proposals, as the draft report confirmed.

“This was not even close to being worth the wait,” said Brian Fallon, executive director of the Demand Justice court-packing project. “From the beginning, the purpose of this commission was not to meaningfully confront the partisan capture of the Supreme Court, but rather to buy time for the Biden administration while it fights other legislative battles.”

Many progressives want to pack the court with friendly jurists in a naked grab for political power. Their goal, in the words of Senate Majority Leader Chuck Schumer (D-N.Y.), is to “change America.” The change they seek would destroy the system of checks and balances that the Founders endowed us with and destroy the independence of the judiciary. That could destroy the civil liberties of all Americans. Those who hold political power under such a regime would be the sole interpreters of the Constitution. Americans would face enormous pressure to conform to government edicts.

While some on the left claim that court-packing is needed to “save democracy,” most American voters aren’t buying it. In an April opinion piece, the Wall Street Journal reported on polling indicating that 68 percent of American voters oppose court-packing. The Washington Examiner, in a June opinion piece, reported that a supermajority (69 percent) of voters reject any proposed court reform measure requiring a constitutional amendment.

For now, the common sense of Americans stands in the way of the court-packers — just as public opinion turned against Franklin Delano Roosevelt’s failed court-packing scheme in 1937. Lacking political backing, from Biden or his Supreme Court commission, the current effort has stalled. But don’t expect the court-packers to give up their fight. A non-endorsement from the White House isn’t likely to deter them.

For those who cherish the constitutional protections of religious freedom and other civil liberties, the words of Irish statesman John Philpot Curran, a champion of liberties, still ring true: “The condition upon which God hath given liberty to man is eternal vigilance,” Curran said, “which condition if he break, servitude is at once the consequence of his crime and the punishment of his guilt.”

Note: This article was first published on The Hill and is re-published here with permission. The article presents the main points of an op-ed published in The Hill. This work was authored Jeremy Dys. The full article can be found on The Hill website, here.